The Pinsa Romana and all you need to know

Pinsa Romana is a culinary product similar to traditional Pizza for its use and consumption but different for the making techniques.

What is Pinsa Romana Differences between Pinsa and PizzaCuriosity 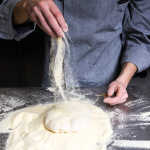 WHY IS IT CALLED PINSA?

Did you know that Pinsa comes from the Latin word “Pinsere” which in Italian language means to stretch, to spread?

What we can properly call “Modern Roman Pinsa” is a reinterpretation of an ancient Roman recipe invented during the Ancient Roman Empire, reworked with new ingredients and modern techniques.

The original recipe comes from an ancient product made among the rural populations living just outside the walls of Rome, who used to cook a kind of “focacce” or “schiacciatine”, grinding cereals (millet, barley and spelt) and adding salt and herbs.

The word Pinsa comes from the Latin word “Pinsere” that means to stretch, to spread. The traditional recipe has been revisited several times over the centuries, until nowadays.

The main Pinsa Romana’s features are:

The intuition and invention of Pinsa comes from the experience and the great passion for bread-making processes of the specialized pizza chef Corrado Di Marco (founder of the homonymous company), who created a new and innovative product that brought a revolution inside the world of Pizza.

Mr Di Marco thanks to his maternal grandfather teachings on the ancient bread-making techniques and scientific research understood and improved dietetic factors and realized an exclusive and inimitable product.

All the stages in the making of Pinsa Romana must be strictly followed demonstrating that producing Pinsa is a real science.

The exponential increase on consuming Pinsa started just over 10 years ago (2017), nowadays there are more than 5000 Pinserie all over the world and thousands of customers aware of the features and peculiarities this product has. 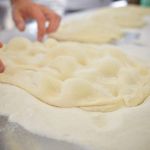 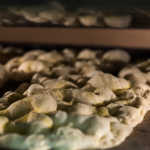 Pinsa differs from Pizza in many features, not only the story.

Here is a list of the main different features that distinguish Pinsa:

The main ingredient is Pinsa Romana flour (owned by Di Marco company). This is a blend of 3 different flour and the addition of dried mother dough. The proportion of the ingredients used in the blend it’s a trade secret, nobody knows it.

Pinsa Romana flour is made by:

Maturation is an important process that happens with a specific timing, directly proportional to “flour strength”.

On the market exist weaker flours (3-5 hours of maturation) and stronger flours that may require up to 48 hours to get the right maturation.

A special attention has to be paid to yeast, since the amount used is very

little: leavening process is very slow, it can last from 24 to 120 hours, rigorously carried out in the fridge.

In Pinsa the flour is mixed with cold water and the proportion of water reaches the 80% (hydration), while in pizza it reaches the 50-60%.

This specific difference makes Pinsa more fragrant and crunchy thanks to the less flour used that also reduce the quantity of carbohydrates, calories and fats and makes the final result more digestible.

The flour used is a strong one that can absorb high amount of water giving soft and well hydrated doughs.

Thanks to its lightness Pinsa Romana is suitable for different condiments.

The opportunity to taste delicious recipes on Pinsa it’s a dream come true. The variety of flavour from salty to sweet, from bitter to sour, are tastes that can be combined on this product.

Pinsa Romana allow you to balance the usage of most caloric ingredients with the lightness of its dough.

The quality offered to your customers increases both in the final product and in the service delivered. 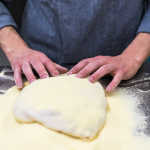 Some questions and curiosity from the specialists:

How many calories are in Pinsa Romana blend?

How many calories are in a Pinsa Romana?

Pinsa Romana dough has about 20-30% less calories than the normal pizza dough, thanks to the higher amount of water the blend absorbs and keeps inside the dough.

Which are the main size of Pinsa Romana?

The main sizes served are two:

Have you got your own Pinseria? Certify it! 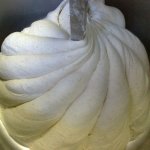 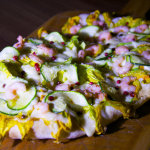 Today Pinsa is a delicacy that is meticulously preserved, it can be bought frozen and anyone can learn how to make it through specific courses.

Its quality control in restaurants is performed by the “Associazione Originale Pinsa Romana”.

Born exactly to preserve and have the Pinsa’s quality respected. Pinserias have to sustain a quality control and are judged by expert members of the association, in case they are judged positively they are certified, becoming a part of an exclusive group of establishments that make Pinsa following protocol. 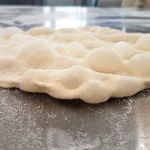 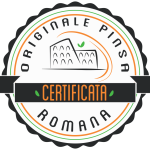 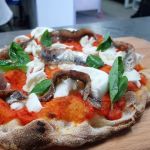 Not only Pinsa is popularly consumed with its flours but also with the precooked artisanal bases, convenient solution for different types of establishments.

Among its advantages there surely is a standardization of the product, which leads to constant and certified quality, they also give an opportunity for different establishments to have a valid alternative to the specialized personnel.

To utilize the “bases”, therefore, some “operators” capable of cooking and seasoning the Pinsas following the tradition are needed.

The precooked bases exist in different shapes and sizes (for example single-portion Pinsas or the Pinsa “al piatto”) and are generally produced with ATM packaging or are frozen.

All the bases are worked by hand inside the specialized production centers and produced with a specific system which allows the “bases” not to lose quality and stay on constant high standards.

The continuous development of the product Pinsa Romana gives life to a cycle of perfection in hand development which gives us the chance to be at the top of such an important sector, the food industry.

Another great new entry is the gluten free Pinsa, after many years since the creation of the Pinsa its gluten free variant has been developed as well.

After a long time of studying the mix and the phases of its creation the desired product has been reached.

Its characteristics regard its digestibility and lightness, exclusively utilizing natural ingredients.

In fact the flour mix for the gluten free Pinsa is exclusively realized with natural ingredients, without the use of gums or thickener. The quantities of sugar in the mix and the final product is greatly reduced considering the standards known in the market as well. It is possible to find more detailed information in regard on our website

Pinsa for amateurs and private use

Since 2018 the Pinsa Romana has become accessible for everyone, even non-professionals can make it at an amateurial level.

After many years and many demands from clients, the mix Pinsa Romana is open for the private market and not just for professional use

A specific service was born to furnish the Pinsa mix and a lot more related products for anyone who needs them, no one excluded. This service is managed by Pinsa For You which offers a window of useful products to make Pinsa and Pizza at an Amati real level.

This website uses cookies to improve your experience while you navigate through the website. Out of these, the cookies that are categorized as necessary are stored on your browser as they are essential for the working of basic functionalities of the website. We also use third-party cookies that help us analyze and understand how you use this website. These cookies will be stored in your browser only with your consent. You also have the option to opt-out of these cookies. But opting out of some of these cookies may affect your browsing experience.
Necessary Always Enabled

Any cookies that may not be particularly necessary for the website to function and is used specifically to collect user personal data via analytics, ads, other embedded contents are termed as non-necessary cookies. It is mandatory to procure user consent prior to running these cookies on your website.